This morning, Global Radio’s XFM did their Naked Breakfast

They took the Danny Wallace show and broadcast live from the O2 Shepherds Bush Empire. But what made this different is that they did everything live. This wasn’t simply a normal outside broadcast with some live links and special guests. Everything was be live – the music, the jingles, even the adverts.

There was a pretty impressive lineup too:

The Stereophonics were the House Band. Plus comedians Tim Minchin and Ross Noble and Paul Weller also featured.

I’m not sure I’ve ever heard of anything being done in quite this way in the UK. It would have been fairly common back in the early days of Commercial Radio in the US in the 1940s and 50s when it was common for the announcers to voice live ads within live shows. But doing something like this on a very formatted station like XFM is quite a challenge. 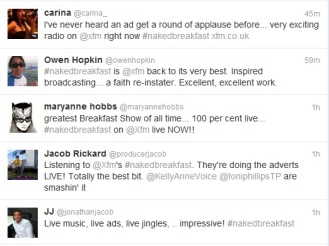 I’m guessing they’ve had to carefully plan what airtime was sold within the show. Because they had to perform the ads live – they had to sell some brave creative to the advertisers too – so that  the ads became part of the performance.

Whilst it’s not something you’d want to hear every day – this is a great example of creative programming that gives the listener something to really interact with. You can listen again to it here: