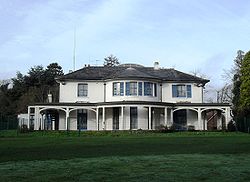 It opened on October 20th 1984. On Monday July 26th 2010, Mercury Fm in Crawley ceased to be – another of Global Radio’s stations that have been rebranded Heart. This is progress – and makes absolute sense in their business strategy. But is another marker in radio history. UPDATE: and not everyone is happy about it.
This was station founded in the great early days of Independent Local Radio. The days when there was enough money to have the Royal Philharmonic Orchestra record your station theme.
My first paid radio work came at Radio Mercury in Crawley. This was after years of hospital and student radio. At Mercury, I gained experience in all aspects of the radio craft, from producing programmes, reading news bulletins, working the radio car and all aspects of studio craft.
It was a big station back in those days. Located in Broadfield House in Crawley, it was a large scale traditional ILR station. There was a newsroom (in the old stables) with a team of 5 or 6 people. A commercial production team of 4. And in programming, the PD, his secretary, a head of music, 3 producers, a couple of programming assistants and maybe even a music librarian. Plus 3 receptionists!
And it was the PD, Martin Campbell, who gave me my break into radio – letting me loose on producing the station’s Guildford breakfast show. And once in, I never left.
When I arrived at Mercury FM, all I wanted to do was be on air. I’d spent years at hospital radio and 3 years at uni mainly hanging out at the student station. In fact in 1982, I’d even won “Best Male DJ” at the original Student Radio awards. And it was Mercury that let me on air. Firstly on many shifts (mostly overnight) on the “Weekend if a Thousand Hits”. Then a time covering lates and sometimes even evenings. And then in 1985, I spent a year as drivetime presenter on Mercury Extra AM. (You don’t remember that station – well, frankly, neither did the listeners). After that experience, I decided I’d rather spend time in the production studio, which I’d been doing all the time I’d been there, and so switched over to be the Commercial Producer – and also gained my first “Station Sound” role too – though that particular term hadn’t been thought of at that point.
In fact this is how we sounded back then. (BTW – this audio breaks my rule from my Capital FM days; Simpsons Grabs = demo tape bin. But this was way back in 1996 – so is just about OK..) (Oh, and the whole Power of Radioactivity thing came from the fact that Crawley was designated the UK’s first Nuclear Free town. Or something. Go figure..)
Back in the 1990s, stations like Mercury gave you the opportunity to grow, to develop, to learn. And I learned from many people still making their mark in radio in many fields. People like Will Jackson (GTN / Traffic Radio), Will Kinder (Radio 1), Matt Smith (SKY News), Dan Wright (Koink).
Now with consolidated stations, networked hours and fewer ways into the industry, is it maybe time for the industry to create a unified qualification and training programme to ensure that future entrants are fully equipped with skills and relevant experience needed. There are precious few stations now where anyone new to the industry would be able to gain the skills that I learned there. Maybe such a scheme could use BBC Local radio stations as a feeder – with those making the best progress able to compete for placements and experience at larger networks or national brands. Whilst college courses fulfill some of those needs, the best place to learn these skills is on the job.
Ironically, it probably is Global Radio who are currently doing the most in this direction, with the establishment of the Global Radio Academy. Hopefully this will give as much insight to the industry’s new young hopefuls as Mercury FM did many years ago.
So RIP Radio mercury – I owe you much more than you ever could know.

6 thoughts on “Goodbye Mercury FM – You taught me so much..”