Do you picture this lot as typical listeners of Absolute Radio?

Last week, I wrote about Capital FM’s coverage of their excellent Summertime Ball, and how the online offering was a little lacking for the tech savvy, online audience. I also hoped that Absolute Radio’s forthcoming coverage of the Summer’s festivals would prove that online content can be engaging, fun and also in some cases perception shifting. Having photos of listeners like those above helps them shift perceptions from being a blokey station to having a wider audience profile.

To me, Absolute’s coverage of this weekend’s Isle of Wight Festival punched well above its weight. Not only were there tons of photos posted during the weekend – both official and user generated. But there was a fair degree of interaction with their audience away from the event.

Via twitter, I got updates on when the acts were onstage and when new content was available online. 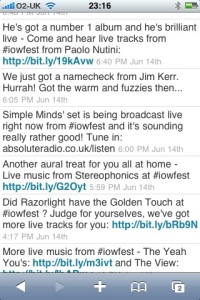 This was rough and ready live reportage – giving a bonus behind the scenes feel to the coverage. For the station – it was simple to create – needing just an iphone and a free program -plus the simple know-how to link to it via various platforms.

In addition, the audio from a number of stage performances is online – not with video but with photo slideshows. This again was something that could be achieved fairly easily with fewer resources needed than creating full video packages. It was also supplemented by video interviews by the key artists.

The beauty of Absolute Radio’s coverage however is how every piece of content is neatly tagged – so that music fans can search for their favourite band and easily find all the relevant content from them. Searching on Stereophonics for example brings you the backstage interview from the festival, plus backstage interviews from a couple of other events. Alongside that, there’s an artist biog and links to buy songs. But more importantly, a link to the 1,189 other Absolute Radio VIPs who also like the band – allowing more interaction and enhancing the station’s online community.

Having seen this offering, I’ll be interested in seeing what they continue to offer across the Summer of Live.

And this is how they did it..

One thought on “Absolute Get it Wight”