A quick post triggered by Dan McGrath at This is Bounce for anyone who has ever had to run an audio session where an advertising agency (“the creatives”) or a client (“the pains in the backside who often change their mind for no reason but ultimately hold the budget”) are in attendance.

I’ve certainly had sessions like this (though thankfully not for a very long time – but the situations are all too familiar.

If you’re in the middle of your pre-Christmas client nightmare, take a moment or two to give it a watch!

And should you need any audio or music for projects, take a look at This is Bounce – they make a nice cup of tea and often have nice biscuits in too..

95.8 Capital FM just send me this on Twitter – the new advert for the newly relaunched Capital Breakfast Show. It’s a variation of their music brand video – but as well as the core artists they play, it also features the new breakfast show hosts. And the artists they play are all “endorsing” up breakfast and the presenters.

Earlier in the day, someone shared a link to the updated TV advert for the rest of the Capital FM network. And as before, there are regional variations for the different markets.

What I like about both of these is the consistency. They are updated versions of the advert they used last year to promote the launch of the Capital FM network. I wrote about that last January. They have taken a seemingly simple idea and they have stuck with it – adapting it and freshening it up – but not tempted to change it or go for something new.

It’s pretty rare in marketing for brands to have the bottle to keep things consistent – there are always tweaks, whether to a logo or a creative idea. Strong, simple ideas always work well. Just look at the ad campaigns for Go Compare or We Buy Any Car Dot Com. Whilst they may be annoying, they are annoyingly catchy.

What the team at Global have done is take an idea that imprints the names of the artists at the centre of everything they do. They use them to endorse the station. They use them to promote their big events. And they now have used them to promote their biggest show. And judging by what I heard this morning, this show aims to be a big hitter. The mix of music, humour and energy was pretty much perfect this morning. News was punchy, travel was quick and on target. And they had the fastest “Pay Your Bills” execution I’ve ever heard anywhere.

Boom! – the breakfast wars are back on..! 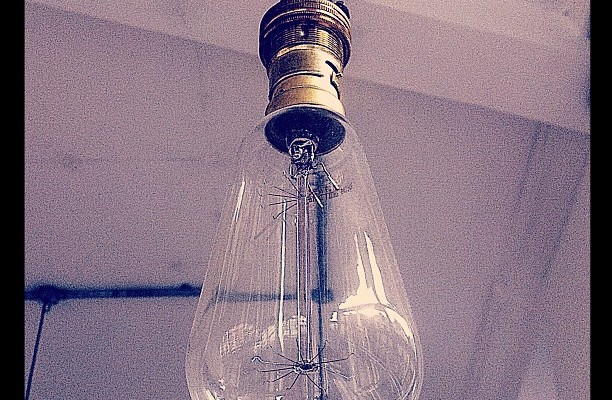 Does radio really suffer from a “creative abyss”? Are there a lack of ideas? (hence the tenuous light bulb reference..)

I believe the progressive devaluation of radio creativity is in great part down to the radio industry itself. Whereas it should be actively encouraging creativity, its own systems run directly counter to this.

I have often worked alongside some huge advertising agencies. Some of them “get” radio and some don’t. And their “big ideas” (often TV based to tie in with big TV campaigns) aren’t necessarily always big enough for radio. We normally help them get to a good place – it’s a bit of a collaborative process.

We make great efforts to help these agencies to understand radio, and also the uniqueness of BBC radio. A snall number of the people I meet admit they don’t listen to radio at all. So education in what’s special about radio is often needed.

We bring them in for creative sessions, take them into the radio networks to see how radio is actually created. It’s a two way process, and needs to be collaborative. But with persistence, it can pay off too.

In answer to John; I feel your pain – particularly with some smaller scale local advertising.

Stations are to blame in this – but sometimes it’s down to a lack of understanding by advertisers. There is a need for radio stations to educate their clients, and it seems the RAB are doing a lot to assist in this area.

But it’s down to educating sales teams too. And if they don’t have a love for the medium – we’re stuffed.